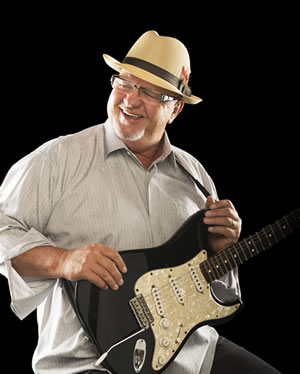 Kenny is a magnificent songwriter, musician, arranger, and vocalist and this year makes 48 years in the music industry for this highly talented Baton Rouge Blues Icon. To add to his many attributes Kenny is a brilliant guitar, music and voice instructor in high demand. Kenny’s latest CD "Justice Blues" is an all original acoustic CD written, recorded and mixed by Kenny, produced by Kenny and his wife/partner Susan on their record label Bluzman Records, LLC, and mastered by dear friend Bob Heym.

In 2008 Kenny and his band represented Louisiana in the 13th Annual Epcot International Wine and Foods Festival in Disneyworld and gained many fans from all over the world. On June 11th, 2005 Mayor Kip Holden of Baton Rouge proclaimed Kenny Acosta Day in honor of the release of his second CD "Spanish Town Mardi Gras". In 2003 Mayor Bobby Simpson of Baton Rouge made Kenny honorary Mayor for a day at Baton Rouge's Fest For All on the Blues Stage during Blues Week; the first such award bestowed upon a Baton Rouge Blues man ever. Kenny won the 2003 Baton Rouge Blues Challenge in the band division and represented the Baton Rouge Blues Society at the 2004 International Blues Challenge band division held in Memphis. In early 2003 under new management with Bluzman, LLC, Kenny and the band were performing in regional festivals events, clubs, etc. from Key West, Florida to Fairbanks, Alaska.